This September 27-29, in partnership with AT&T at the AT&T Foundry in Plano Texas, developers from across the world came together to hack the future of enterprise at the AT&T Business Hackathon with Magic Leap: 5G and Spatial Computing.

Out of two hundred applicants, sixty-five of the brightest minds in 3D and XR were invited to bring their skills and experience to help redefine industry and commerce with 5G and spatial computing. The top team walked away with a $5,000 cash prize, a new Magic Leap One, and an invitation to the AT&T Business Summit later this fall. This unique event was also sponsored by Ericsson, Equinix, Ciena, Viacom, and NCR. 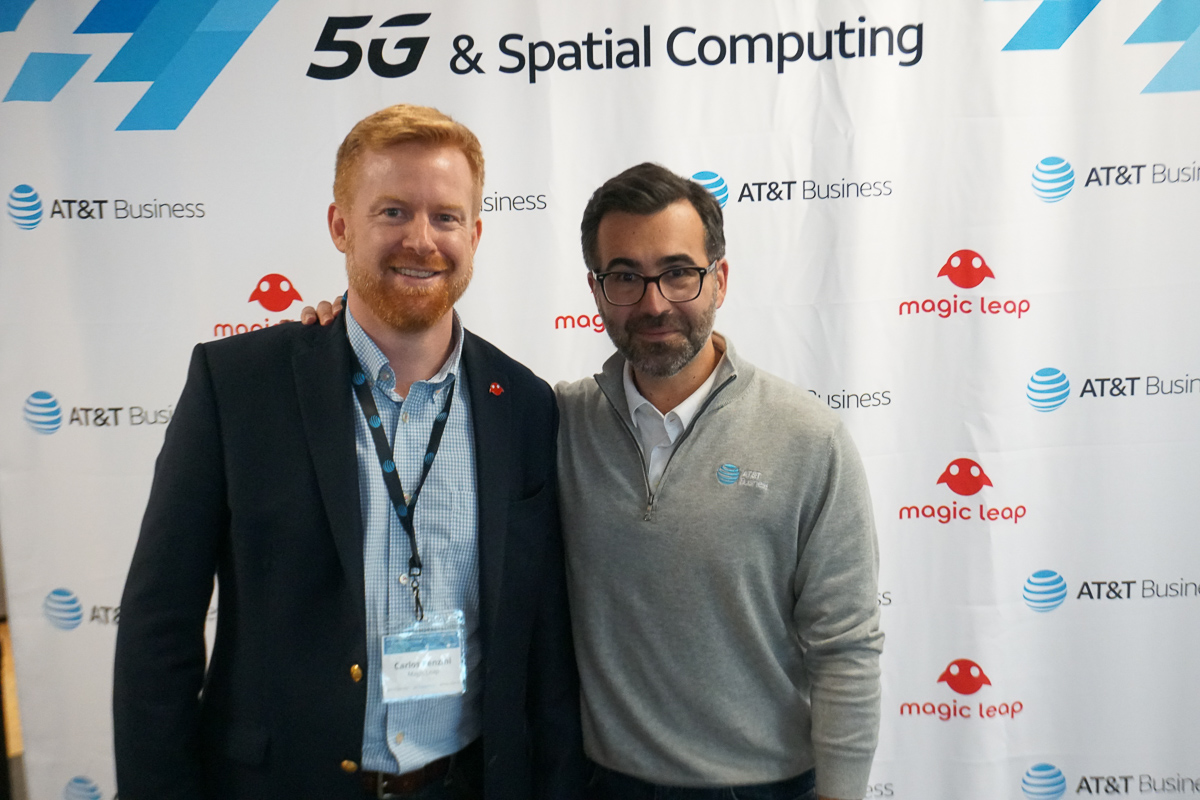 Magic Leap SVP, Carlos Penzini and AT&T Business CMO, Mo Katibeh, kicked off the event with one question: “What if you could give your employees and team members super powers?”

For the uninitiated, a hackathon is a sprint for developers. Fueled by caffeine, code, and creativity, devs come together to share ideas, and to see what they can create in a short amount of time. The goal isn’t to build a finished, go-to-market product, but to lay the foundation of an idea and see where it leads. GroupMe was famously created at TechCrunch Disrupt, Instacart got their start on StartupBus, and countless tech giants have launched world changing products out of internal hacks. 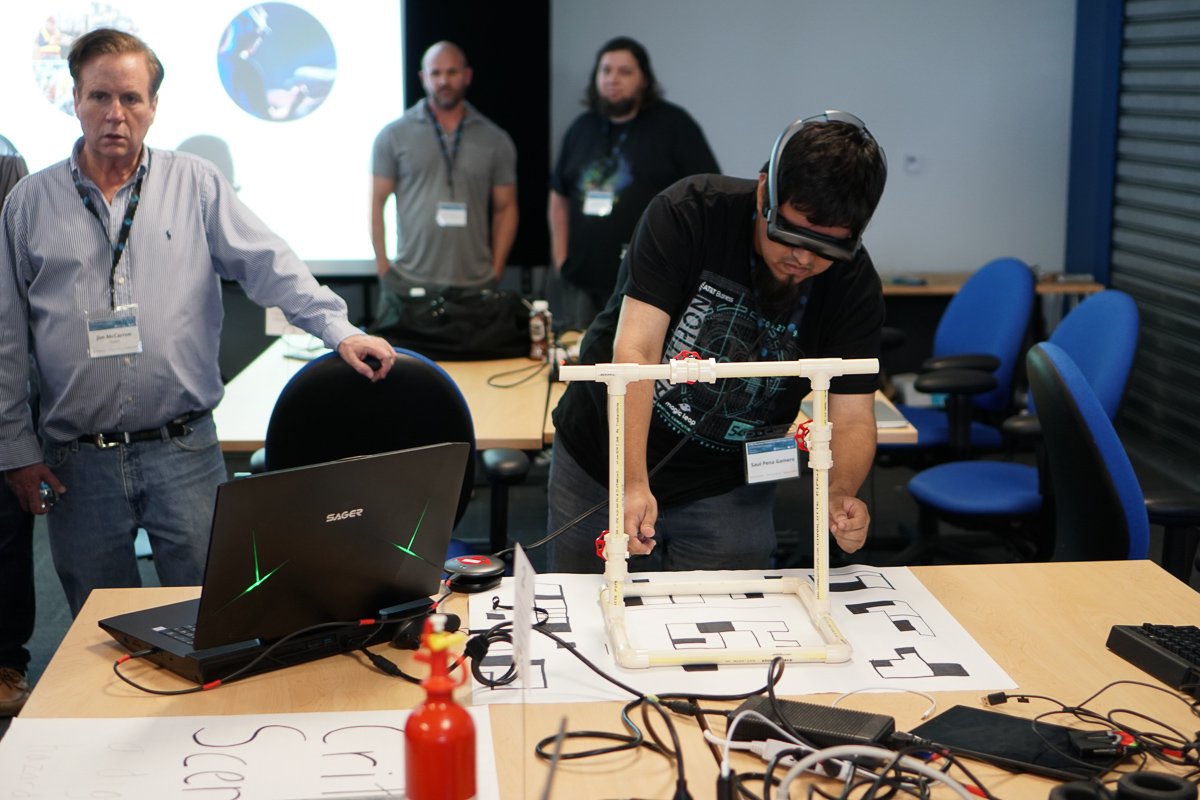 Critical Success built a smart training app. What you can’t see is that the model has been brought to life as a 3D replica surrounded by fire, which our hacker is fearlessly putting out.

The goal of the hack was simple: to build a business application that helps manufacturing, retail, finance, or healthcare companies to transform the way they do business. With the help of Ericsson and AT&T, we had 5G connectivity on site and Viacom offered up their content API for those interested in working with their video assets. Magic Leap developer evangelists were on hand to support the teams throughout the weekend as they worked through some fascinating technical challenges.

Professional developers at the height of their careers paired up with students just getting started on their developer journeys. We had teams from startups and four universities, Mexico, and the Netherlands all converging on Plano, Texas to see what they could build in 36 hours. Not much sleep was had, but the projects that emerged got everyone excited about a future powered by spatial computing and 5G. 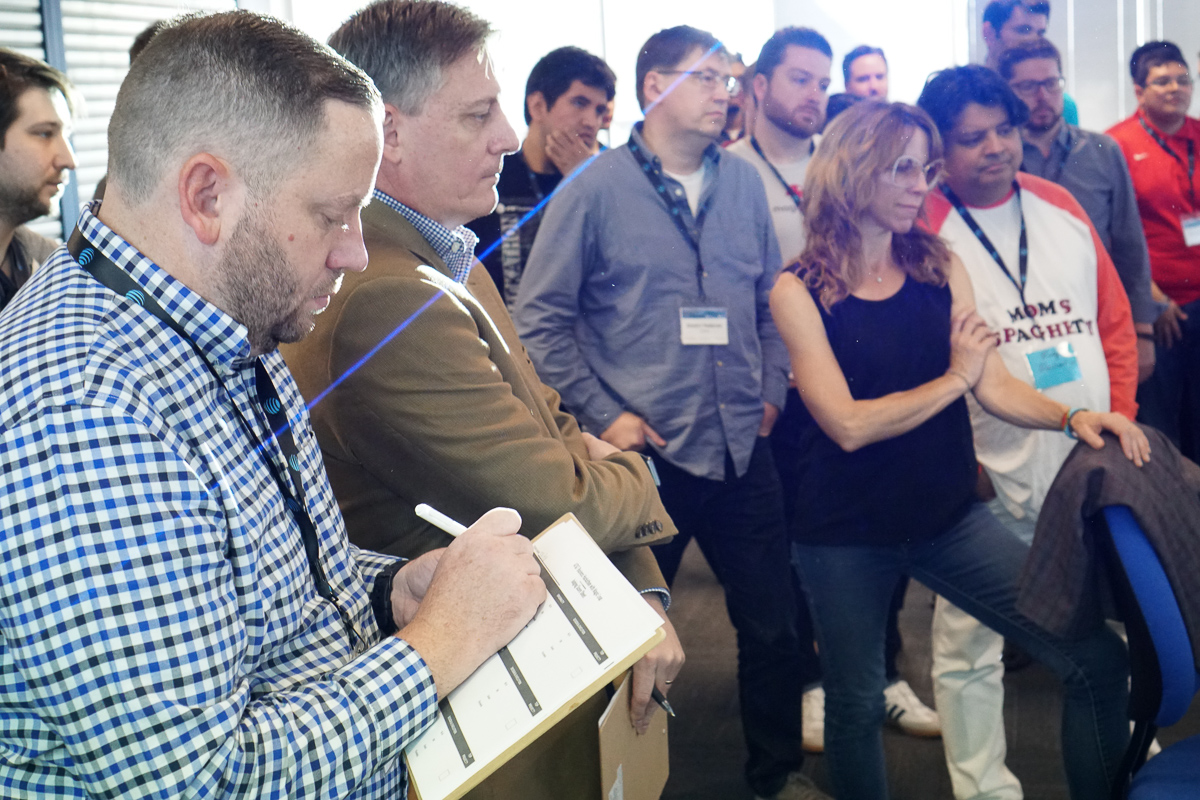 Grand prize winner: $5K + Magic Leap One + invitation to AT&T Business Summit Technologies: Lumin SDK, Zxing, Unity, OpenCV Pharma Leap created an end-to-end solution that speeds up the time it takes to fill out prescriptions and helps ensure pharmacy personnel can deliver the right medication to the right patients. Imagine walking into your pharmacy to drop off a prescription. The pharmacist wears a Magic Leap One headset and your order pops up in front of them. The device guides the pharmacist straight to your medication and they use the headset to scan the barcode, count out the pills, verify your order, and deliver your medication, without going anywhere near a desktop computer. 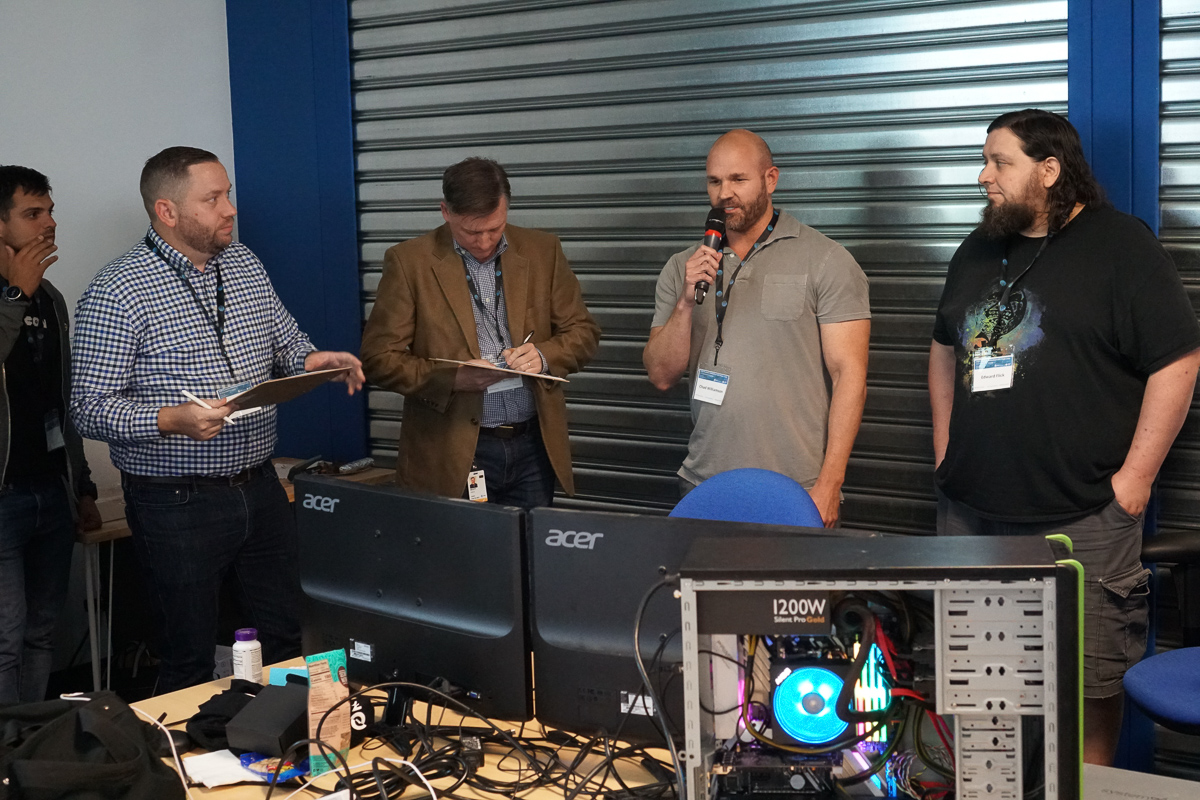 Team Pharma Leap drew some fierce head nods with both their rig and their product.

First Runner Up - $3K + Magic Leap One Technologies: Lumin SDK, Unity How do you easily align objects in spatial computing? Over the course of two days, Team East Edge took a unique and simple approach to solving this complex problem. Their solution used hand and finger tracking to set two points which could then be used to identify an object. This smart solution has a multitude of uses. Imagine you need to identify a specific part on a machine. While image recognition algorithms are improving, they’re not there yet, and spatial computers still need physical markers to identify complex objects. This inspired hack could change that. 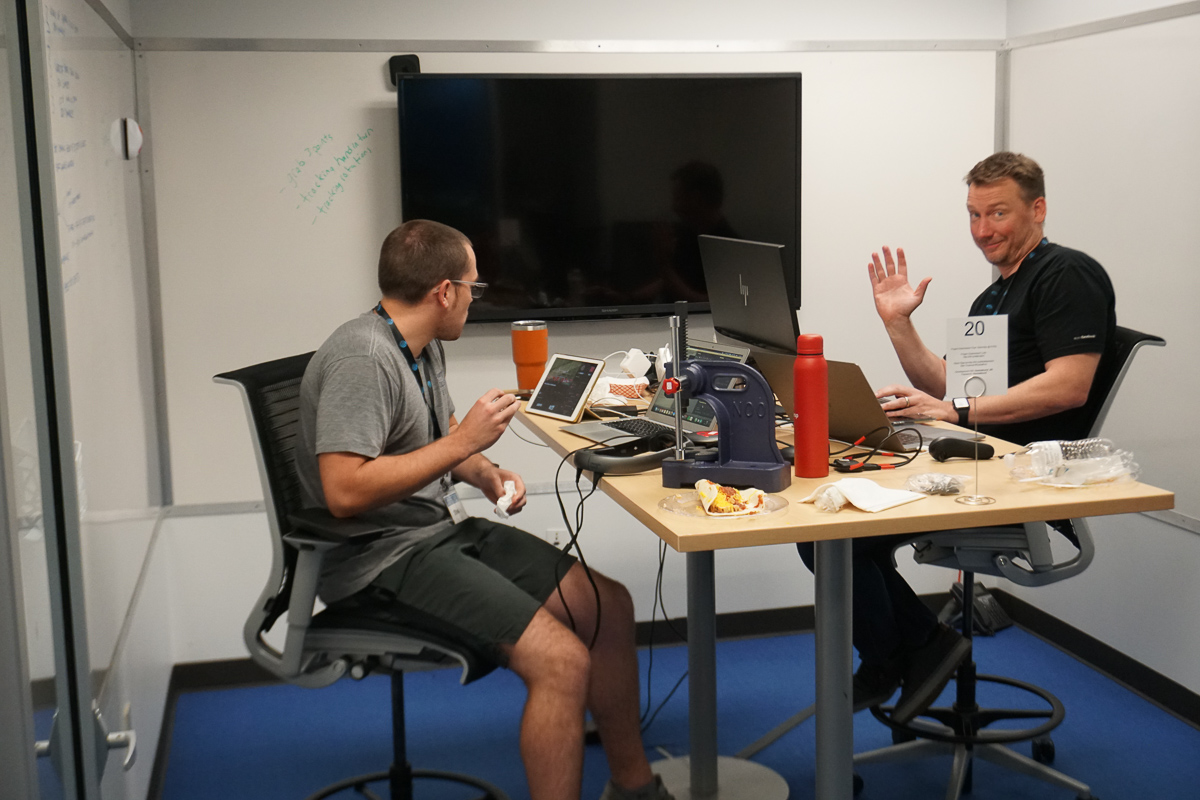 Team East Edge were too busy innovating to bother with photos!

Second Runner Up - $2K + Magic Leap One Technologies: Lumin SDK, Unity, ViacomAPI StreamAPI created a content streaming platform that uses eye tracking and machine learning to advertise goods. By analyzing video streams, it shows you advertising that’s relevant to whatever you’re viewing at the time. Imagine you’re watching the MTV music awards on your Magic Leap One, and just by glancing at an artist’s jacket, you’re shown content that’s relevant to that specific product. Clever stuff. 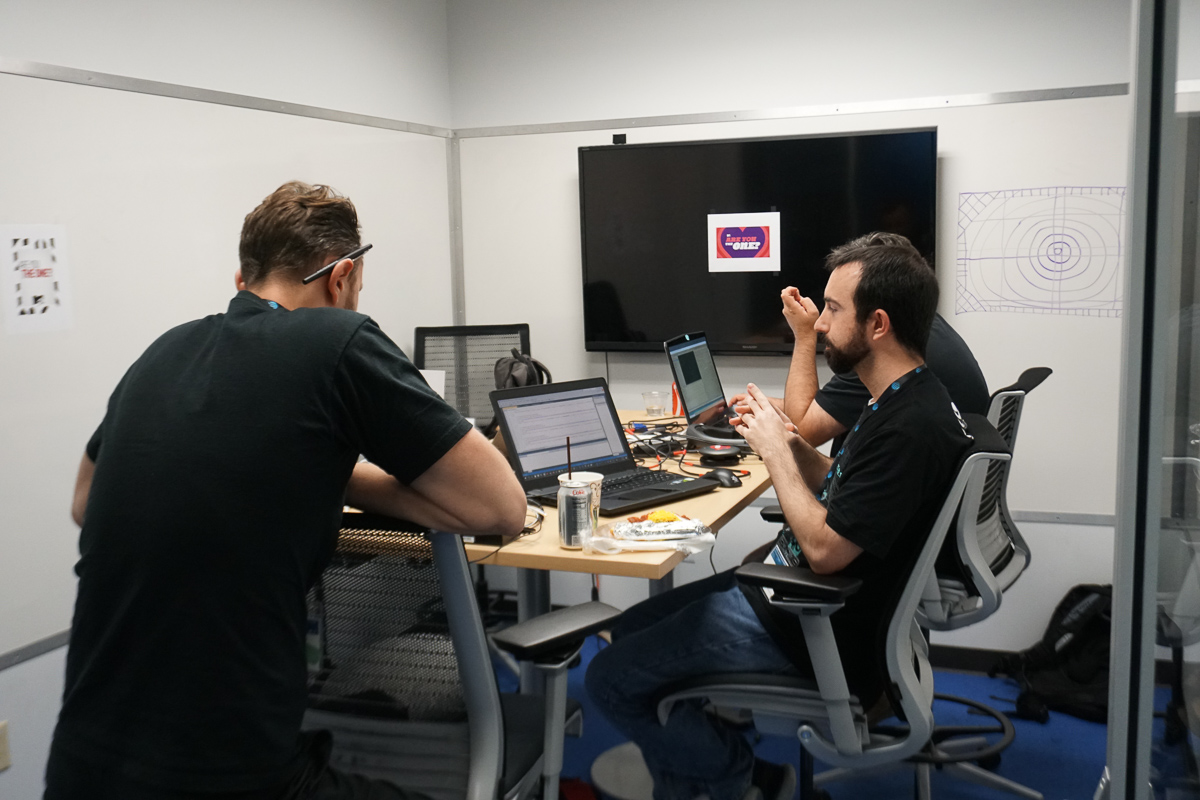 The StreamAPI team hardly knew each other before the event, but they came together for an awesome hack.

Team Milan & Johnny created a spatial retail builder that allows you to easily place furniture, walls, and architectural features in a space and then auto generate it to a PDF and/or purchase order. The designer (Johnny) recreated the inside of an AT&T store and literally made the judges say “WOW” when they ran through the demo. 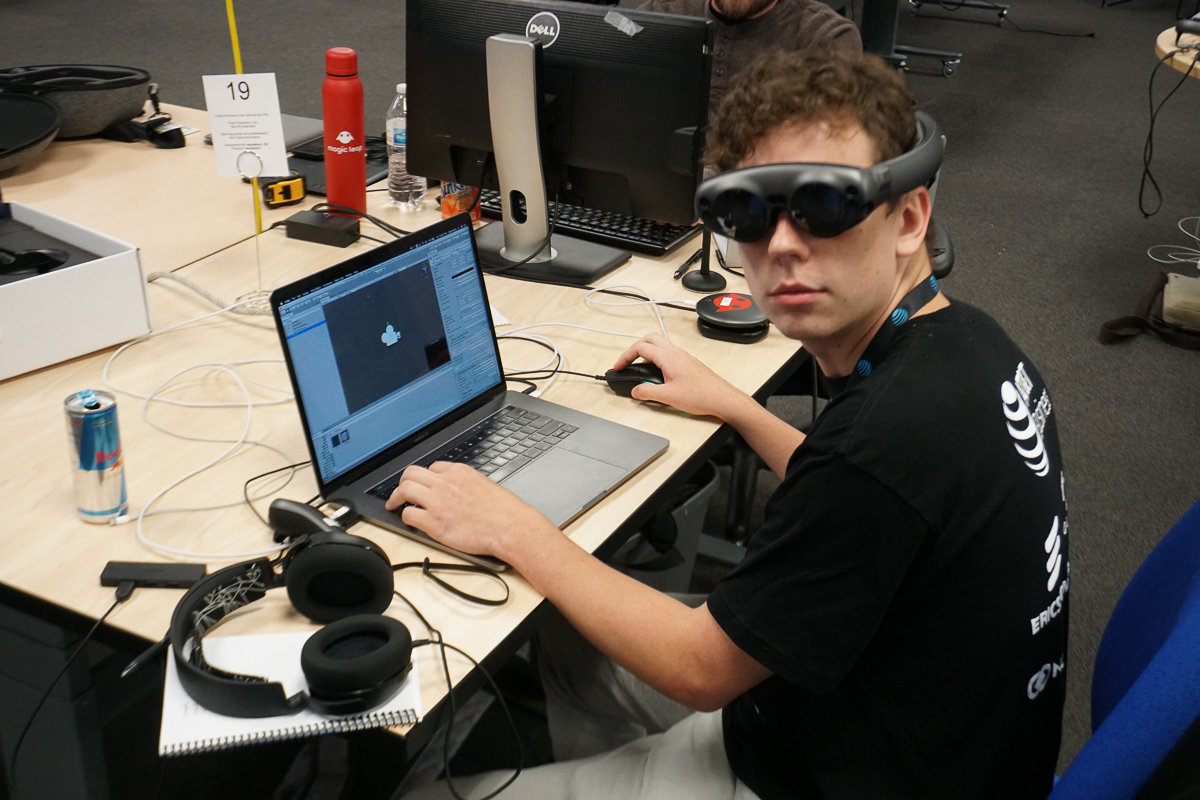 The one and only Milan. Johnny’s in the background making furniture.

Justin Dempsey from ARVizio, one of our Indie grant winners, worked with devs from the sponsor company Ciena on a training and assist application. They quickly hacked together a device stream that allows technicians to broadcast what they’re seeing in the field to remote support workers. Imagine you’re trying to figure out how to fix a server on a rack. With this hack, you can call up an expert, show him exactly what you’re seeing and have him share 3D models with you in real time.

WavyXR flew all the way from Holland for the hack. They created a healthcare product that allows cardiologists to recommend an exercise regime for people with heart issues. Patients would be invited to use Magic Leap One to go “butterfly catching”. While they’re busy chasing red admirals, their heart rate would be monitored using a wearable. During the weekend the Dutch team created both a Unity app and a WearOS app. 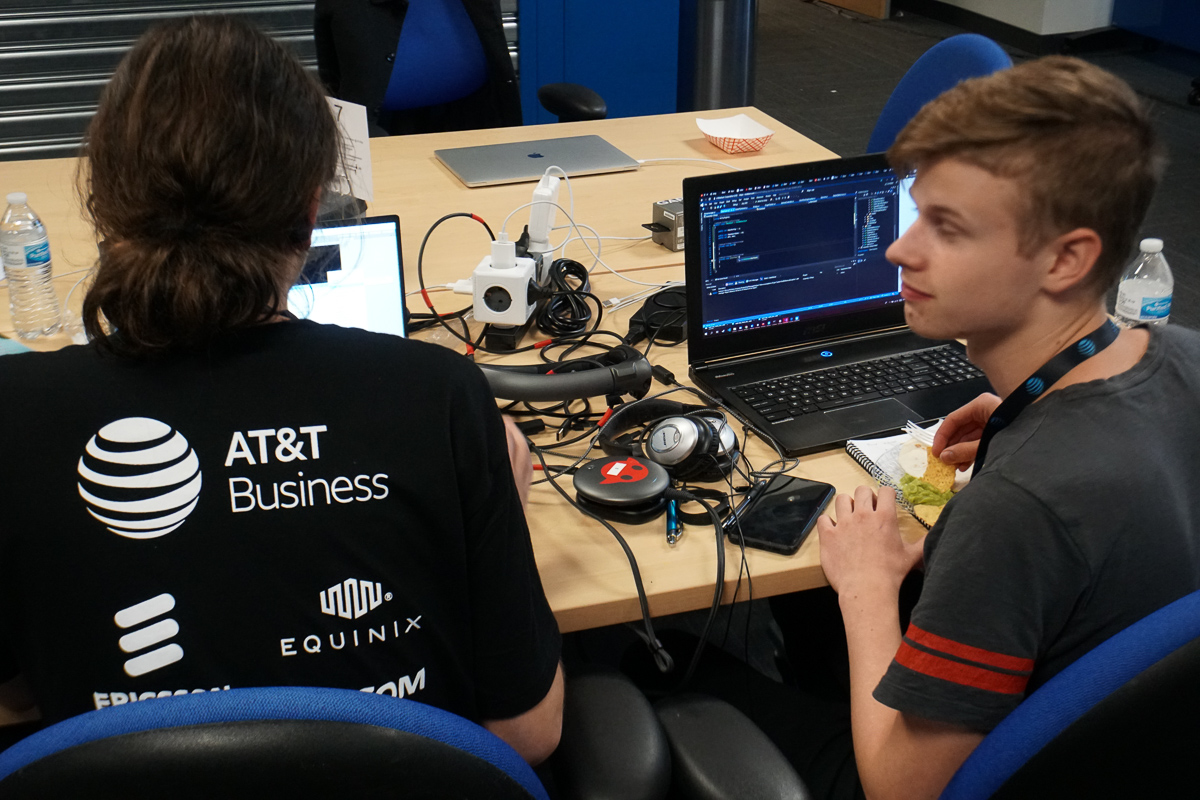 The team from Resilient, an active XR developer, worked on a medical education app. Their pitch to us was that as soon as medical textbooks are printed, they’re out of date. And learning about the 3D human body on a flat surface just doesn’t make much sense. Their innovative app gives a glimpse into the future of learning advanced and complicated topics. And it’s definitely spatial. 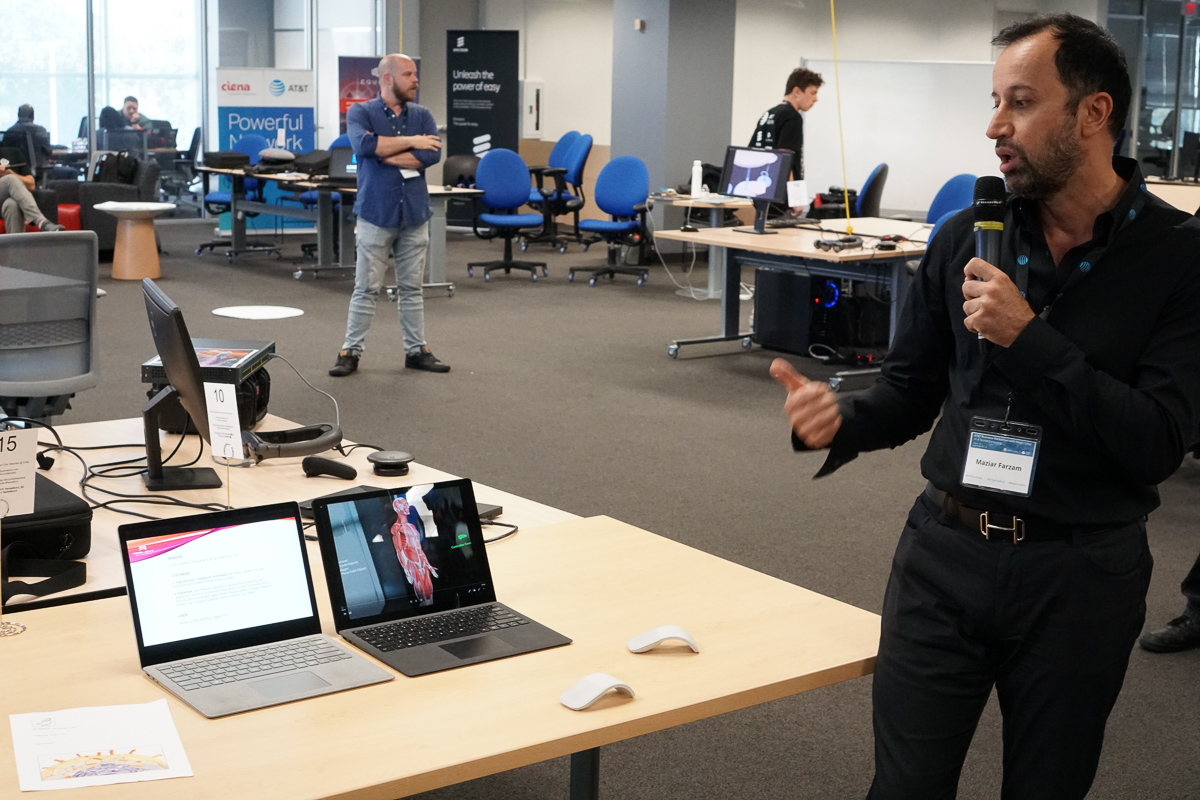 On the subject of airplanes, a team from SMU built out a predictive maintenance and real-time analytics spatial computing dashboard for aeronautics repair and manufacturing. In essence, they built two apps: one that showed the status of a fleet of airplanes, and another that’s designed to help a technician make real-time repairs to a plane. 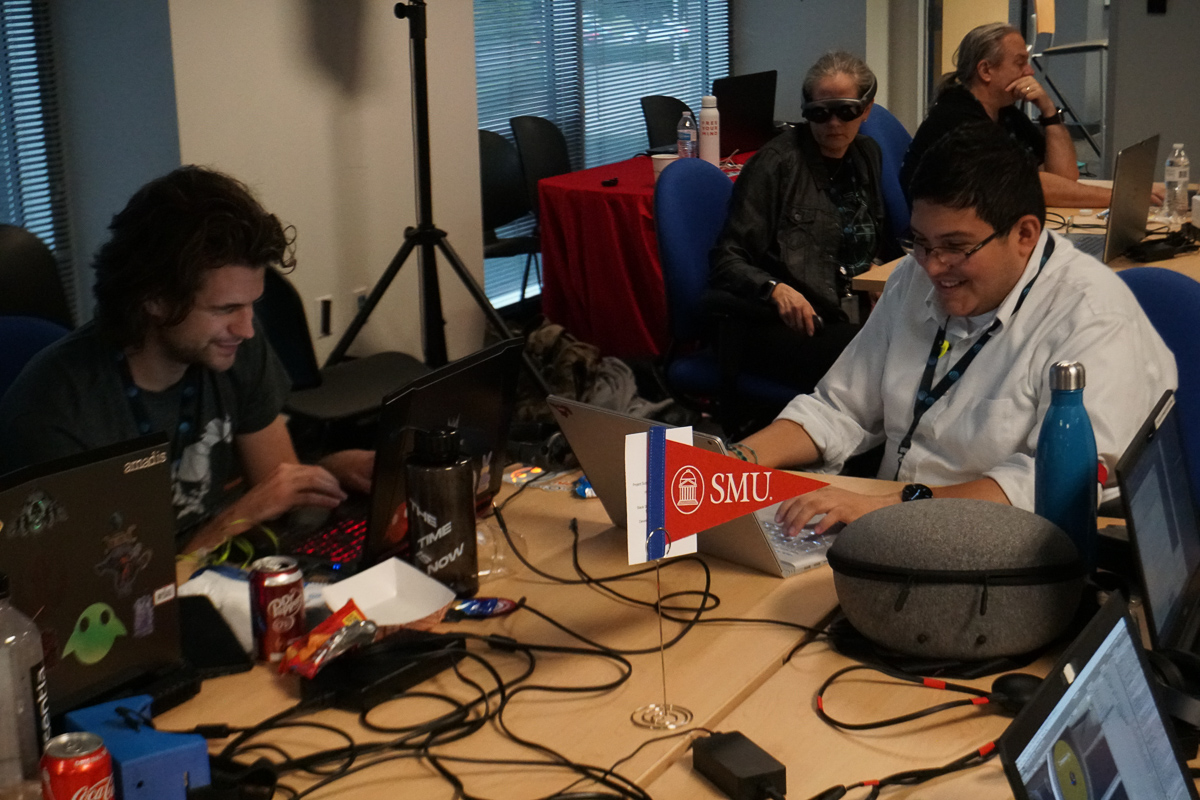 SMU - Having fun and staying focused

A year ago, we worked with AT&T to host the first Magic Leap Hackathon, and one of the teams to come out of that session was BadVR. Although they didn’t win, they had an incredible idea for an app called SeeSignal, which won our Independent Creator Grant, and, as of last week, has launched on Magic Leap World.

SeeSignal is the world’s first fully immersive data visualization platform to use spatial computing to show you the strength of your cellular phone signal, WiFi, or Bluetooth network. We used this groundbreaking app at the event to visualize the strength of AT&T’s 5G on site. Let’s just say that seeing those green signals was quite a sight to behold.

Going forward, we’re hoping to work with each and every one of our hackers to bring their apps to market and push the bounds of what’s possible with 5G and spatial computing. Here’s to their ideas and the future of enterprise.