The brief was simple: tell us your best development idea and we’ll help make it happen.

We were thrilled to receive over 6,500 entries covering all sorts of weird and wonderful experiences. After careful deliberation, we whittled the list down to a handful of projects that we felt would really benefit from our development support and guidance.

Over the next few weeks, as even more finalists publish their experiences on Magic Leap World, we’ll be sharing their thoughts about developing for Magic Leap One.

Next up, Dinosaur Kit: a fun, educational app that invites you to assemble dinosaur skeletons from scattered bones. Build a Velociraptor or Protoceratops in your own space and learn about their anatomy.

Check out the gameplay in Dinosaur Kit

Jakub previously worked in the AAA gaming sector on titles such as: Bulletstorm, Gears of War: Judgment and The Witcher 3. Currently, he’s busy creating mocap animation sets and selling them on asset stores. He also freelances and designs his own game experiences. Jakub built Dinosaur kit in Unity entirely on his own, and we think you’ll be impressed by his creation.

We interviewed Jakub to find out what it was like developing for Magic Leap One as an independent creator, and to get his thoughts on how spatial computing will change the way he works and experiences the world. 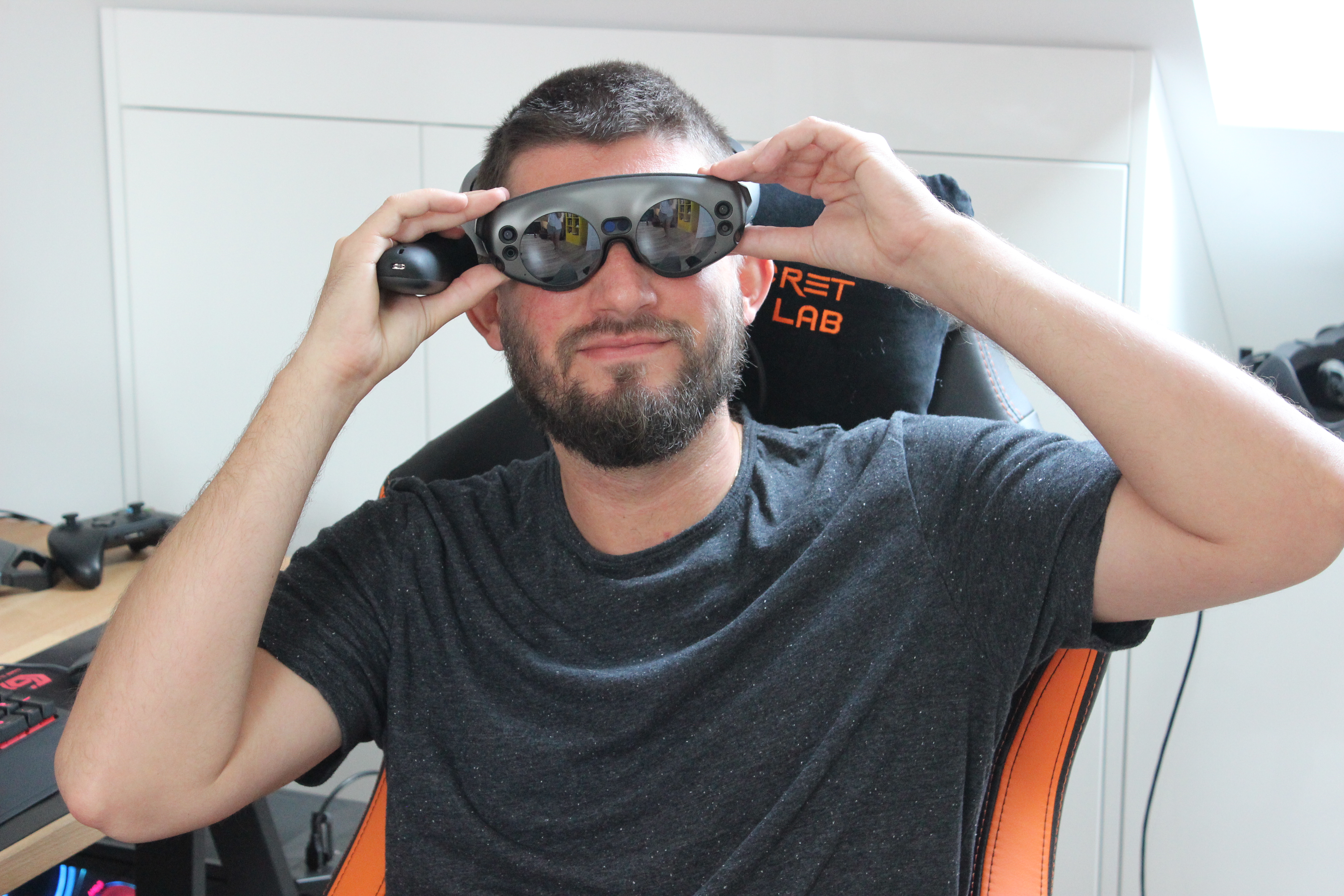 Can you talk about why you decided to develop for Magic Leap One?

I’ve worked on VR games as a hobby since Oculus DK1 came out (Malfunction, Heavy Walker, Spell Fighter VR), but I’d never even tried a Magic Leap One headset before I was accepted into the Independent Creator Program. As an independent developer, I get to choose which project I’ll work on next, and when I first saw Magic Leap, I thought it would be fascinating to try and create a spatial experience.

I submitted an idea to the Independent Creator Program for an experience that would be fun and viable to make. I’m used to making action games, but considering the circumstances, I decided to propose a calmer, more educational experience.

My idea was to create a dinosaur bone puzzle, which could be played in a public museum, as part of an exhibition, or at a user's home. There are lots of dinosaur enthusiasts out there, and assembling a Velociraptor skeleton is something that could appeal to students, educators, and all sorts of curious people.

What was it like developing an experience for Magic Leap One as an individual vs. creating something as part of a larger team? What advice would you give to other individual developers creating spatial computing experiences?

For me, developing on my own is a very rewarding experience. When people ask "you made this?", I can say "yes, I made this", and I feel I actually did. When you work in a group, you have to accept that you’re just a small cog in a larger creative machine. Sure, the machine is necessary to build a large and robust experience that can’t be created by one person. But, to me, working solo is about you, and what you want to make, whilst working in a team is about making the best possible product. Both styles of creative work are attractive, so I don't want to limit myself to just working in a group, or just working solo.

Another thing is that no project is truly created alone. I use free game engines, I buy assets and plugins, I use royalty-free music, and if I get stuck on scripting, I ask friends for help.

For any developers about to start a solo project, I have one piece of advice: make your project as small as possible. A prototype, which you made in four hours, is likely to take four months to develop into a minimum viable product. When working solo, it’s important to complete and release the project in a reasonable time, otherwise it will seem like an impossible task. When it's nice and short, you can clearly see the finish line and push through to the final creation. Don’t fret about the challenge—solo development can be really enjoyable, as I found creating Dinosaur Kit for Magic Leap.

We've been told you did a lot of optimizing around your experience. Can you share some of the technical and design challenges you faced and how you overcame them? In Dinosaur Kit, the dinosaur skeletons consist of more than 180 bones. One of the challenges was to make the assets look good and still maintain the 60 FPS frame rate. It was mostly trial and error to get the desired FPS, which sometimes resulted in a new approach to gameplay. For example, disabling the live physics on unused bones turned out to have a positive effect because the bones didn’t just drop and roll randomly when you let them go. Instead, it was possible to organize the puzzle pieces and leave them floating in the air near where they should be fitted. I also had to compromise on texture, atlasing, lighting, and shadow, as well as some work on the game save system.

There are a lot of educational experiences you could build, so why dinosaurs? As a kid I loved anything related to dinosaurs, and that love never fully went away. I assembled a lot of plastic and wooden dinosaur skeletons kits back then. A year ago, I got my first 3D printer, and naturally the first thing I did was to print a model T-Rex skeleton.

For me, it was a natural decision to make a spatial app about building dinosaurs. Labelling the bones with their correct technical names is a cool and easy way to learn too—after assembling the skeletons a few times, you automatically memorize the bone names.

How do you see educational content evolving through spatial computing?

I see huge potential for spatial computing in the future of education. The case for learning anatomy on a holographic human body instead of from a book is pretty obvious. I can also imagine an educational spatial driving experience which assists you in a real car, or something as simple as highlighting the keys on a piano to help you learn a song.

I believe spatial computers will eventually become as essential to our lives as smartphones are now.