Over 80 developers, designers, and creatives of various backgrounds gathered at Colorbloq — a vibrant, creative workspace slightly reminiscent of Willy Wonka’s Chocolate Factory — to imagine the future of spatial computing at the AT&T Mixed Reality Hackathon with Magic Leap.

Over 80 developers, designers, and creatives of various backgrounds gathered at Colorbloq — a vibrant, creative workspace slightly reminiscent of Willy Wonka’s Chocolate Factory — to imagine the future of spatial computing at the AT&T Mixed Reality Hackathon with Magic Leap.

While AT&T has hosted over 200 hackathons since 2011, this was their first hackathon exploring spatial computing with the Magic Leap One, as well as being Magic Leap's first official hackathon.

For us at Magic Leap, this event was a big deal. We spent eight years obsessing over a monolithic undertaking, and the countless tiny details that it comprised. We dreamed up a crazy, collective vision and did everything we could to bring it to fruition. And then, it finally happened. We set the Magic Leap One free to find its way to creators everywhere. Great! So the question became ... Now What? 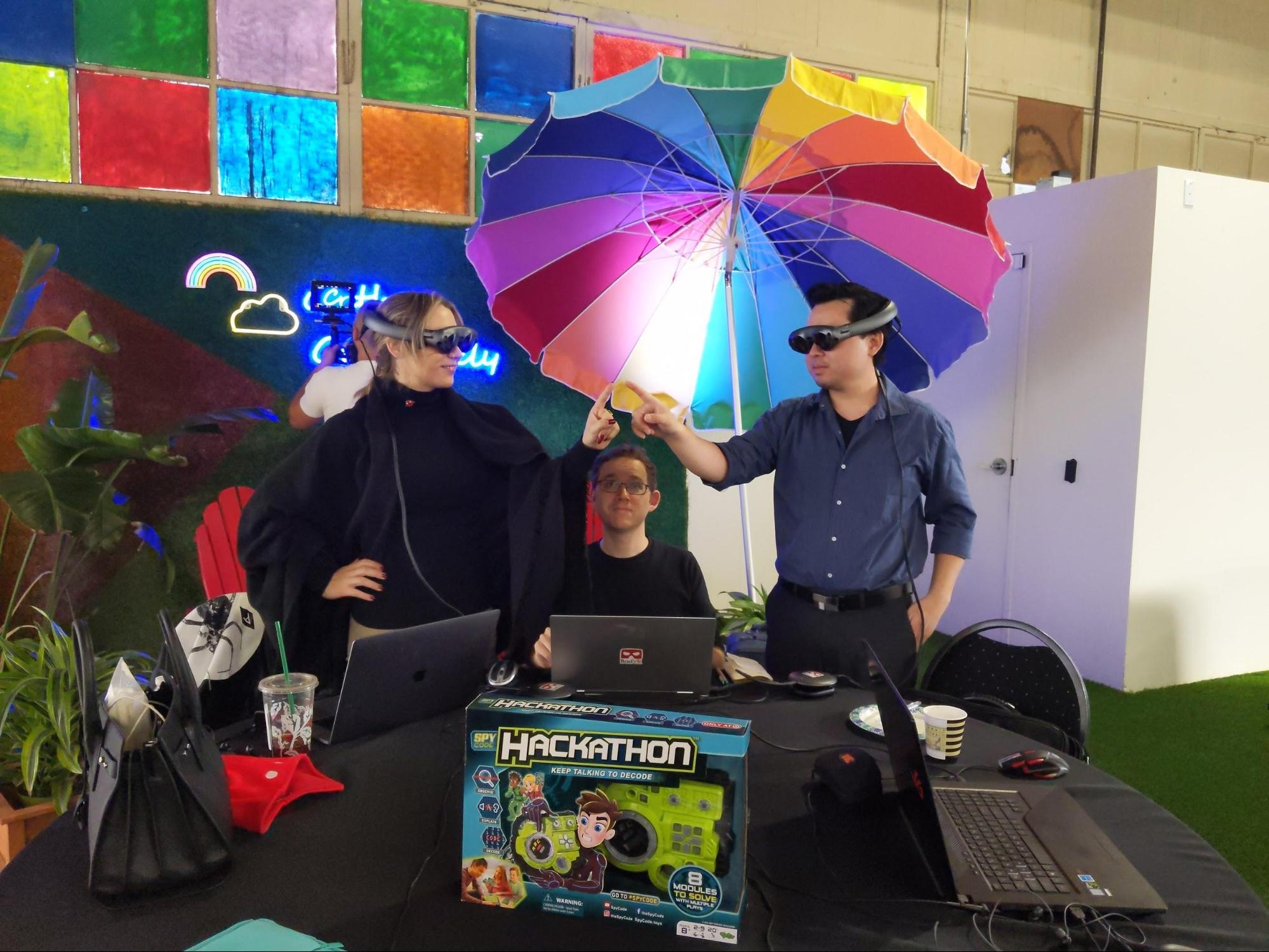 What a weekend! Over 48 hours, 29 teams worked tirelessly to bring their ideas to life. Strolling through the space, I was swept away into a hectic, otherworldly dream. All around me, hackers were coding feverishly, crafting paper into UI wireframes, hanging makeshift image-tracking markers on walls. The magic was everywhere. Our friends at AT&T played a very significant part in every aspect of the Hackathon’s success, and we can’t thank them enough for their immense involvement and help in co-organizing and executing this event. 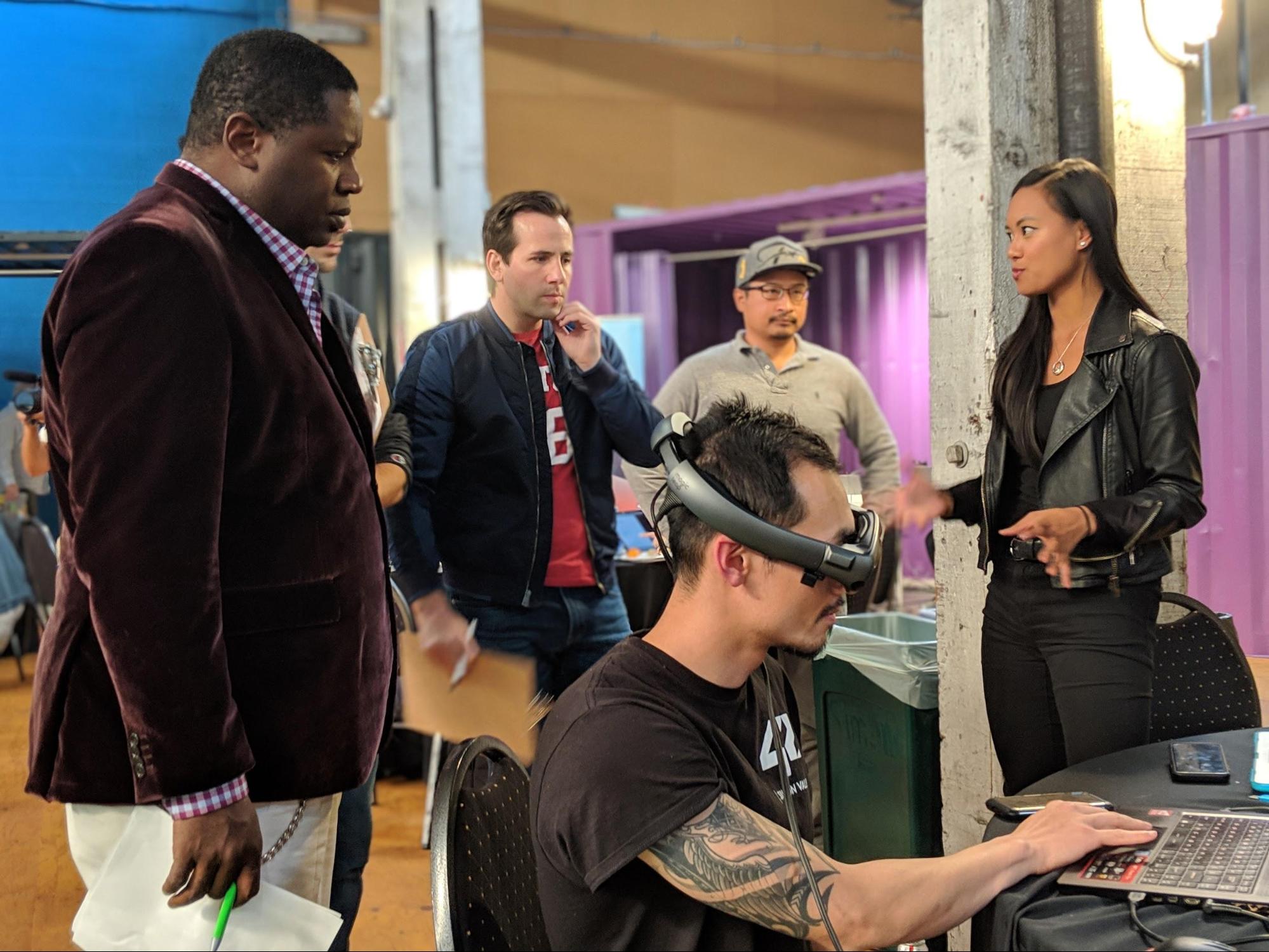 We Leapers were there to provide support and mentorship, troubleshoot, talk to creators, and — most importantly — listen to them. The hackathon provided an unparalleled opportunity to connect with the XR dev community and listen to feedback about everything from our platform and hardware to the ecosystem, APIs and tooling. (This feedback is then circulated internally to make improvements that will benefit our community.)

Back to that pesky question: anybody working in XR knows that Now What — the minor task of building the future of spatial computing — is a pretty tough nut to crack, and it’ll take time before anyone fully understands what that future looks like. But this hackathon offered tantalizing glimpses at potential answers:

A personal, multi-user time machine in which your memories are forever captured in videospheres.

Built both in Unity and in WebXR (using Exokit), the LifeScope team recorded 360 video and implemented it in a beautiful, functional “time-traveling” UI that utilizes hand tracking, headpose and the 6DoF Control.

A steam-powered circus, combining the real and the augmented to bring you wonders from the outer edge of the universe.

Dr. Dodgy's Intergalactic Augmented Reality Circus relies on image tracking to interface between a live show with an MR overlay, combining the real and augmented into a cohesive, entertaining experience.

Magic Ideation takes advantage of the 6DoF Control, speech-to-text (via a third-party library), and various Magic Leap One features to create an ergonomic, intuitive spatial environment for brainstorming, thought organization and even 3D wireframing.

An app for the visually impaired, which uses spatial audio to provide information about the relative distance and height of physical obstacles in the room.

Eyes for the Blind takes advantage of the Magic Leap One’s World Reconstruction (meshing) capabilities and spatial audio to convert visual data to a precise location-based audio information layer; it demonstrates the tremendous potential for accessibility and quality-of-life improvements that spatial computing can offer.

A WiFi signal visualizer with a sleek, futuristic interface.

Visualizing Big Data in intuitive, meaningful MR is quite the challenge — but the BadVR team knocked it out of the park with an interface that utilizes gestures and finger keyposes, doing away with peripherals to focus on one of the most natural input mechanisms: our hands.

An extended work environment that extends a laptop screen with an MR interface.

This team, relying primarily on hand gestures and a networked backend, prototyped a method to mitigate small-footprint displays and “screen real estate” shortage: offload your desktop to the space around the computer!

An Inventory Management App that provides directions and see-through views of closed lockers.

Simplicity is key for a natural UX, and this app offers a simple — but extremely useful — superpower: the ability to see through closed doors!

… these, and many other inspiring prototypes, were created in one weekend. We were blown away by the ingenuity, resourcefulness, and imagination that attendees brought to the table. There were three official winners (and each has earned their title!), but as far as we’re concerned, everyone who breathed life into their ambitious ideas in less than two days has won this hackathon.

Because it is them, and you, who’ll provide the answers to the Now What. Because the future we care about is the one we’ll create together.

So if you’re itching to join us on this journey, great news: while we have many upcoming grassroots events and hackathons, you don’t need to wait for one! The Independent Creator Program is our way of supporting new voices from independent developers and their unique visions.

Listen: If your idea is so exciting you lose sleep over it, you already know you belong here.

If your vision is so inspired it must be realized, you already know you have to see it through.

And if we can help you turn your dream into reality, what are you waiting for? Apply for the Magic Leap Independent Creator Program today (program closes Dec. 15), and start creating!